The Madtown Fechtschule is a public display of skill and control with competitive Dussack and Longsword tournaments styled after the rules and restrictions of a 16th century event.

Each pool participates in their own fechtschule.

Everyone will fence a King of the Hill, three passes to a match, five strikes per pass. The fencer who wins the most passes wins the match, which earns them one Victory Point (your gold coin prize). Fencers may also earn Artistry Points by exhibiting clean examples of Meyer’s dussack technique, awarded by the Pritschemneister.

Losers of the first longsword fechtschule gather into a Barber’s Pool, and will participate in their own fechtschule, a King of the Hill as before in the dusack.

The winners of the first longsword fechtschule and the Barber’s Pool fechtschule then fence in the Final Fechtschule.

In the Final Fechtschule, the competitors fence King of the Hill, best of five passes. 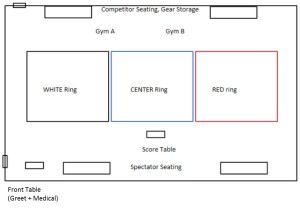